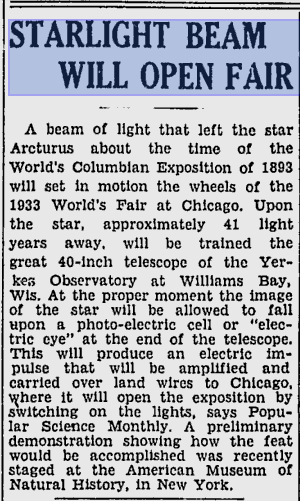 Just as President Grover Cleveland had dramatically opened the World’s Columbian Exposition of 1893 with the touch of a button triggering electrical current all around the fairgrounds, the 1933 Century of Progress would open just as dramatically with an electrical signal that would activate the Fair’s lights.  And that electrical signal would be triggered by photons from the star Arcturus, light that had left that star in 1893.

It was a symbolic and powerful connection between Chicago’s two great World’s Fairs.

Arcturus is one of the brightest stars in the sky.  Its distance was thought to be 40 light-years away, so photons captured in 1933 could be said to have started on their journey through space in 1893.

Director of the Yerkes Observatory in Wisconsin proposed the idea to the first director of the Adler Planetarium in Chicago that the Fair be opened by this beam of starlight. Photons from Arcturus would pass through the Yerkes 40-inch refracting telescope and focus on to a photoelectric cell that would generate the electric current needed to light up the three and a half miles of lights along the Chicago lakefront fairgrounds.  There was great excitement and support for the idea.

The Fair was conceived by prominent Chicago businessmen as a celebration of 100 years of technological innovation; its motto  “Science Finds, Industry Applies, Man Adapts.”  The Century of Progress was intended to bolster national optimism during the bleakest years of the Depression.

The opening ceremony just after 9 o’clock on the evening of May 27, 1933, saw over 30,000 people in attendance in the open-air court of the Hall of Science, while twice that number could hear the ceremony on loudspeakers scattered throughout the grounds, and hundreds of thousands throughout the country listened to the broadcast on major radio networks.

After some  introductory remarks about the stellar characteristics of Arcturus and photoelectric cells, the importance of enriching the mind and the pioneer spirit of America,  the observatories were called upon to send their impulses from Arcturus over Western Union telegraph lines to a giant 60-foot-high board of switches and relays mounted on the rostrum. In moments, the Fair’s searchlights banished the night.  The astonished crowd applauded wildly and roared their approval.  The fact that a few photons that had traveled 40 years from a distant star brought about this spectacle was a true miracle of progress. 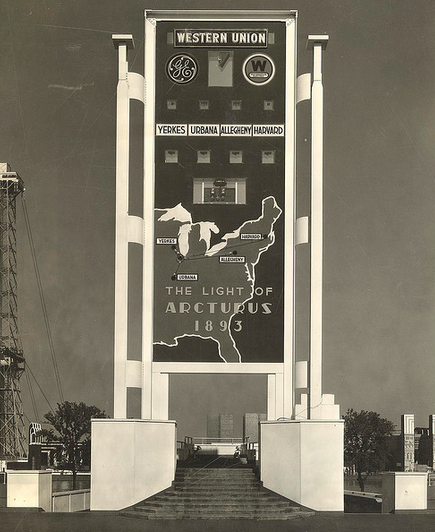 Many thanks to Jeff Kanipe for his in-depth research on this event.