The Statue of the Republic was her official name.  But she became affectionately known as “Big Mary” and was a star at the World’s Columbian Exposition of 1893. In fact, fairgoers gave her the nickname.The 1893 Chicago World’s Fair – a mere six-month event (May 1- October 30) in Jackson Park – had a huge impact, particularly in its influence upon American architecture.  So much about the Exposition was huge, especially in the “Court of Honor,” the central grouping of humongous, neoclassical, all-white buildings set around a Venetian-like lagoon.  This central area came to be known as “The White City.” And standing proudly at the head of the basin was this huge statue of a woman, who reflected the same classical spirit as the buildings surrounding her.Daniel Chester French, the American sculptor best known for his monumental seated Lincoln in the Washington Memorial (1922), was commissioned to create the statue for the Exposition.  The Statue of the Republic was 65 feet tall, made of plaster, but covered in gold leaf and a crown of electric lights (wiring going up her iron frame insides).  Standing atop a 40-foot pedestal, she wore a long flowing robe and one of her outstretched arms held the emblems of the Fair: a globe with an eagle atop.  At the time, she was the second tallest statue in the country, after the Statue of Liberty.Daniel Chester French was proud of her: “…and lo! an American goddess stood forth, with golden hair, clothed in shimmering draperies and by night a halo of stars around her head.”  She inspired awe!Big Mary stood until fire destroyed her in 1896.  But in honor of the 25th anniversary of the World’s Fair, French was commissioned to create a replica of The Republic, although much smaller – 24 feet.  You can still see her in Jackson Park today, but she now goes by the name “Golden Lady.” 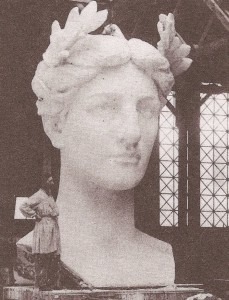