One of the main things that WendyCity is about is sharing the BEST of Chicago architecture and history.  Who’s doing what?  Who’s good?

Well, here’s the perfect place to kick that off:  TOURS.

Chicago is known for its architectural walking tours.  Most visitors understand that it is one of THE things you should do when you’re here.

And here’s THE woman:  Margaret Hicks.  Her tour company is Chicago Elevated – a one-woman operation.  Margaret is a rock star tour guide, an inspiration to me, my friend.  She loves Chicago with all her heart and it shows.

There is so much to love about Margaret and her tours; they are like small parties on the street !  Even during her Disaster! Tour, you find yourself smiling and laughing with the group (!).   Margaret is smart and funny and has a way of explaining history and architecture that make them sing.

Margaret was a Chicago secretary by day-comedian by night up until an unhappy move to New York City. She returned to Chicago with a fierce love for her hometown.  She soon became a Chicago Architecture Foundation docent and discovered that leading tours was what she wanted to do.

It took losing her secretary job (“I was the worst secretary!”) and the suggestion of a friend for Margaret to conceive of starting her own tour company.  She says: “Best thing I ever did. I am definitely one of those ‘way better off now’ kind of people and I will be forever grateful.”

Chicago Elevated’s first tour – the mostly underground Pedway Tour – was in January 2010.  The “Chicago Elevated” name was the brainchild of Margaret’s husband; and once they discovered that the CTA didn’t own the domain name, it would be hers.  She says that sometimes people get confused, thinking she does el train tours – while she actually is doing many of her tours underground! 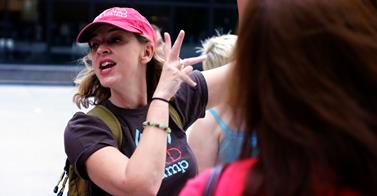 The Pedway Tour was a hit.  No one was doing this kind of walking tour and many Chicagoans had no idea the Pedway even existed.  After some great local press, Chicago Elevated took off.

Margaret has created a variety of different tours that are fun and unique.  Her Disaster! Tour is simply mindboggling: to walk a short distance around the Loop and realize how many tragedies have taken place in such a small distance.  But Margaret is a gifted storyteller and these disasters, in her hands, become amazing tales of human folly.  She is unfailingly respectful of the suffering involved, but brings out the dark humor of history.

This is one of the beauties of her tours: she believes that “all of it needs to be done with a sense of humor or else what are we all doing there?”

Her brand new Binocular Tour is incredible, too.  After extensive research, she has put together what feels like the most entertaining art history course you could ever take.  Using the cute little binoculars (that you get to keep), you are led on a journey of building details – looking up, looking closely.  Even if you think you know Chicago’s architecture pretty well, you will see and learn something new on this tour.

And that is the mark of a great tour guide: to interpret history, architecture, art with the words – the stories –  that connect with people.  Margaret is one great tour guide.

To stay in touch with Margaret and Chicago Elevated: 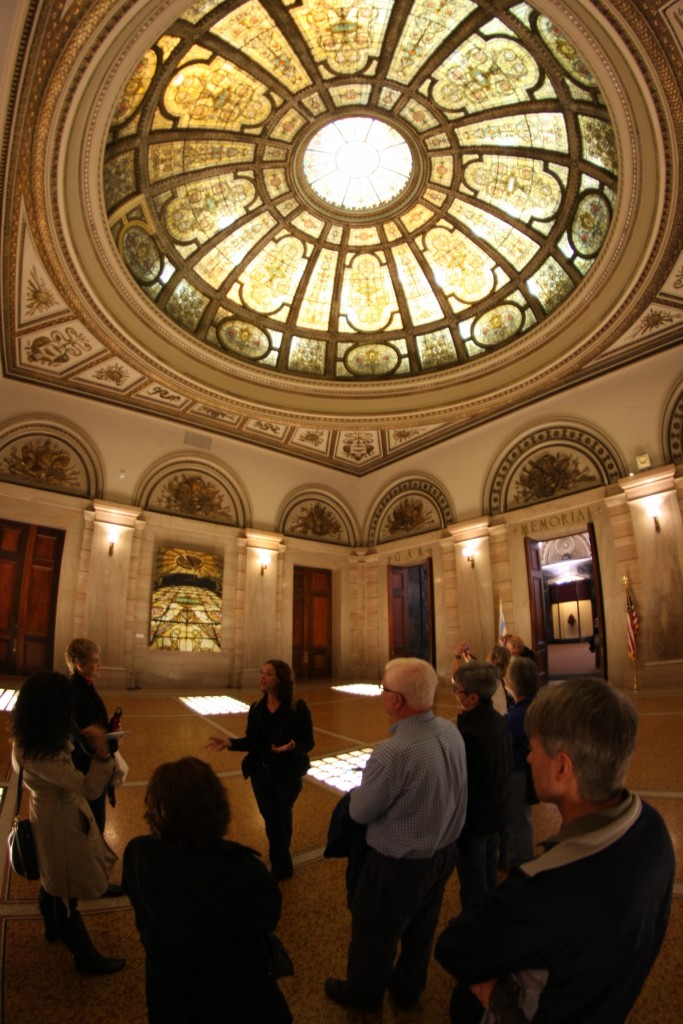