The Luxurious Theaters of Balaban & Katz: Encyclopedia of Chicago Fact of the Day

Founded in 1916 by West Siders Sam Katz and Barney and A. J. Balaban, by 1925 the Balaban & Katz chain of motion picture theaters had constructed theaters of unprecedented size and splendor across the Chicago region, enjoyed a monopoly from Minneapolis to St. Louis, and set the national standard for luxury and profitability. “B&K” achieved this dominance by taking advantage of new technologies and shifts in population. Of their famous picture palaces—the Central Park (1917), Riviera (1918), Tivoli (1921), Uptown (1925), and Chicago (1921)—all but one were located in outlying areas of the city, newly served by the “L” and home to growing numbers of prosperous middle-class consumers. B&K attracted these patrons not with the quality of its films but with opulent surroundings, extravagant service, full-scale musical stage productions, and the pioneering use of air conditioning. These strategies influenced film exhibition nationwide.  ~Encyclopedia of Chicago 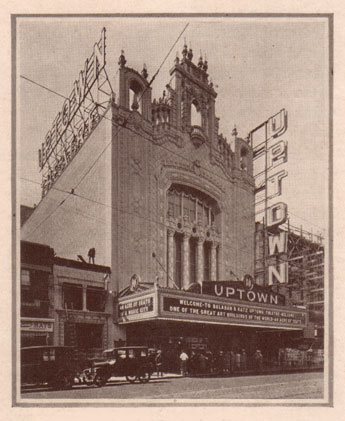