Toy Maker for the World: Encyclopedia of Chicago Fact of the Day

Throughout the twentieth century, Chicago was home to the leading manufacturers of toys, from Lincoln Logs and Tinkertoys to Pac-Man machines and Beanie Babies. Toy manufacturers thrived in Chicago for the same reasons makers of other products did: rail, water, and air transport provided a cheap means to receive raw goods and to ship finished products to wholesalers and retailers worldwide. The city’s abundant labor supply also contributed to the area’s attractiveness as a manufacturing base.

By 1900, manufactured toys were designed to be smaller versions of the machinery, conveniences, or building materials used by adults: cars, trains, cabs, and tractors were molded from cast iron, fitted with clockwork engines, and stamped with a real brand name at such firms as Hafner Manufacturing Company, whose plant was on the Near West Side. By 1907, Hafner was handling huge orders for the look-alike mechanical toys—especially their model trains, the American Flyer line—pouring in from New York wholesalers and local merchants such as Montgomery Ward & Co.

So great was the demand for realistic toy cars that in 1923 Freeport-based Structo Manufacturing Company turned from making Erector Set–style building toys to making model-kit vehicles such as a toy Model T, which came with a real hand crank and shifting gears. Similarly constructed trucks and tractors filled out the Structo line, which flourished for decades. 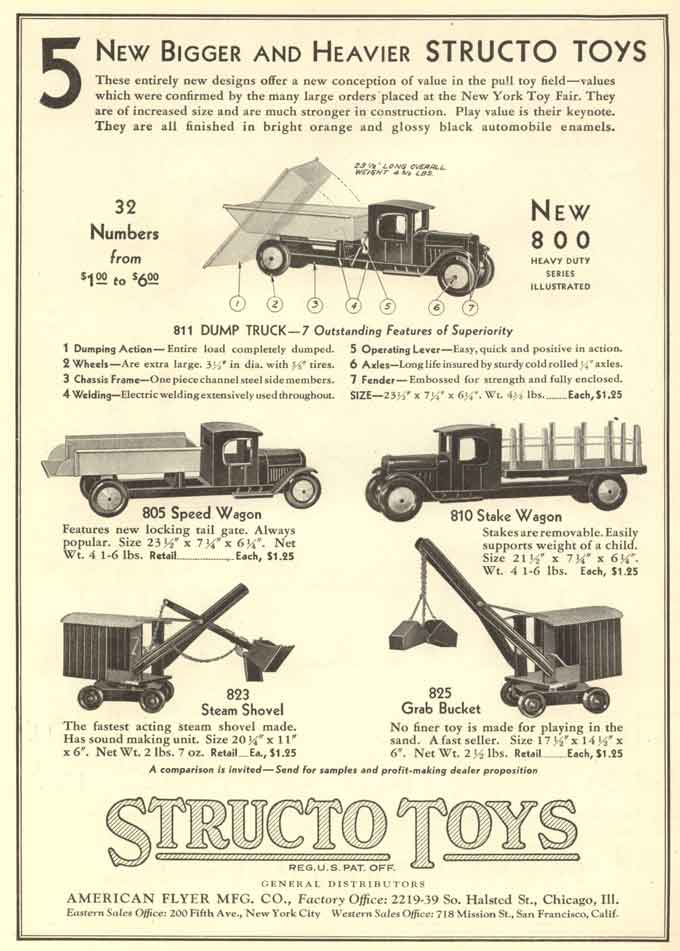 A special variety of miniature toy got its start in Chicago, when publisher Charles O. Dowst saw a Linotype machine at the World’s Columbian Exposition and lit on the idea that such a machine could be modified to stamp out tiny metal charms. From there, Dowst founded Tootsietoys, the company that made tiny charms and novelties, including the prizes found in boxes of Cracker Jack. Dowst was the first to create a die-cast miniature car; he later made a replica of the Model T Ford, then General Motors cars and Mack trucks. Makers of those cars and trucks often requested a look-alike by Tootsietoys and used the miniatures as marketing gimmicks. 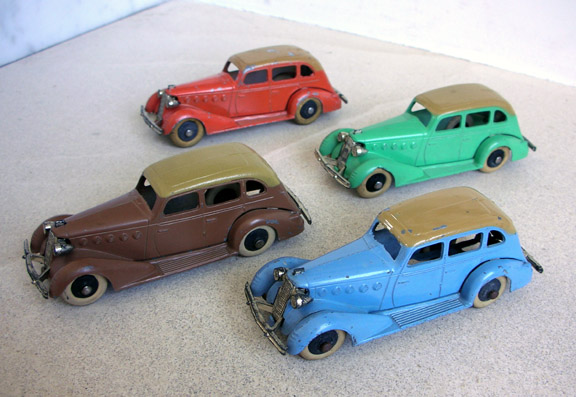 Chicago was also the birthplace of some famous wooden toys. Tinkertoys—still a popular building toy—were created in Evanston by Charles H. Pajeau, who poked holes on the rim of a wooden sewing spool and created an ingenious building joint, allowing wooden spokes to be connected in a variety of directions. Pajeau first exhibited his invention—as a windmill—in a storefront during a New York toy fair in 1914 and never lacked for buyers after that time. By the 1960s two million Tinkertoy sets sold annually.  ~Encyclopedia of Chicago