A thoughtful gesture by dad: bringing home a “Sack” of 5-cent sliders for mom!  Give her a “Night Off” !

Although the White Castle fast food chain did not get its start in Chicago, it had several important Chicago connections:

1) Upton Sinclair’s 1906 “The Jungle,” with its graphic descriptions of  meat processing in Chicago, had scared many American’s away from beef – especially ground beef.  The founders of White Castle (1921, Wichita) were determined to convince Americans of the healthful qualities of beef. Their hygienic restaurants featured clean, white porcelain enamel on steel (inside and out) and the fresh beef being prepared in view of customers.

2) Although “castle” was in the chain’s title, it was the 1936 pre-fab restaurant in Minneapolis that became the standard look for White Castle for years to come.  Its model?  The Chicago Water Tower. 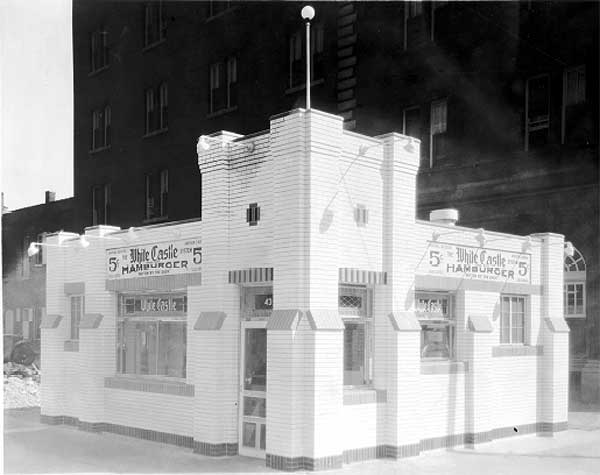 White Castle at Cermak and Wabash in 1929