Out of sight to most drivers, commuters, and pedestrians moving along Chicago’s concrete grid are the many green roofs and rooftop gardens in the city — up to 7 million square feet on approximately 500 rooftops.  Over the past decade, Chicago has been a leader in green roof installations, with more square footage than any other city in the United States.

The city that rose out of the prairie and marshlands now sports indigenous plants atop its skyscrapers.  Look up and you may catch sight of trees or other plant life.

Green rooftop technologies, long practiced in Europe, have more recently found their way to America. Urban rooftops (metal, concrete, black asphalt, utilitarian) have traditionally been underutilized space. But the introduction of vegetation on rooftops can radically transform a city.

When Chicago implemented the 2004 Sustainable Development Policy, which required private developers receiving assistance from the city to include sustainable features in project designs, it kicked off the green roof boom in the city.

Green roofs can serve as a corrective to the environmental challenges of urban density by mimicking native habitats: absorbing rainfall, cooling air temperature, and providing shelter for wildlife, not to mention growing crops, sporting solar panels, and hosting honeybees.   Green rooftops are thought to be cost-effective for building owners, extending roof life and cutting energy expenses.  Green roofs can become attractive amenities, too, giving urban dwellers an opportunity to enjoy the peace and calm of green.

The extent of this lush green world on top of buildings is an aspect of city life of which few may be aware.  Unless you’re high up in a skyscraper, or in flight, looking down, you may not realize how much green rooftop space has sprouted in this city.

Here are some of the notable green roofs in Chicago:

Millennium Park.  Covering two parking garages, a rail station, and the Harris Theater, at 24.5 acres Millennium Park is truly a rooftop covered in vegetation – and the largest green roof in the world.  The wonderful Lurie Garden is a highlight. 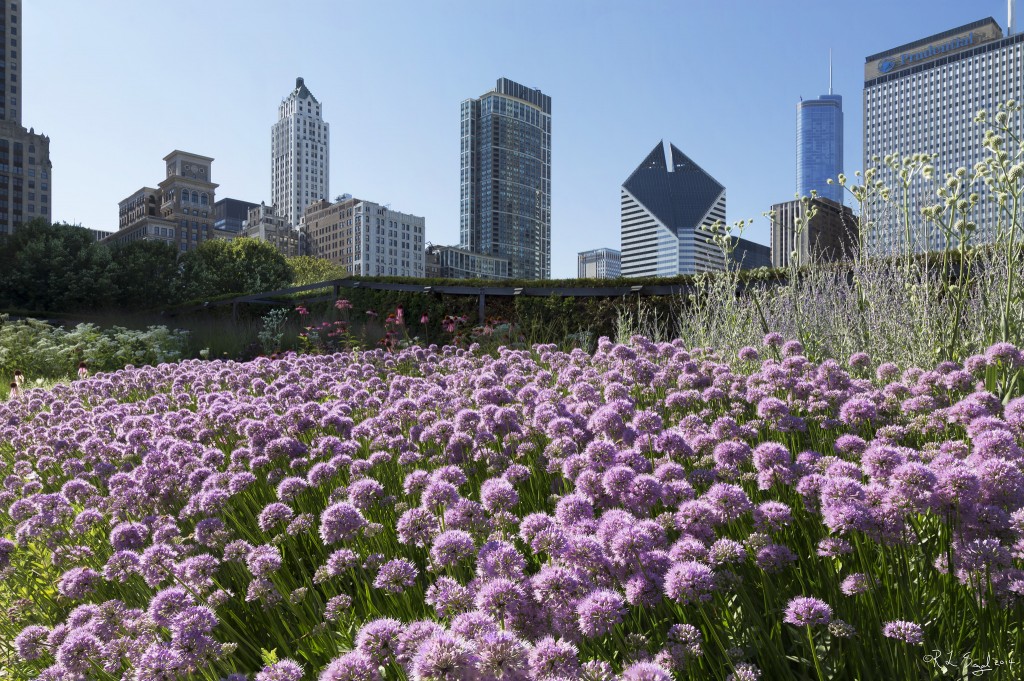 City Hall.  One of the first green roofs in the city and one of the most publicized.  At over 20,000 square feet, the rooftop garden features 150 plant species and beehives that produce about 200 pounds of honey annually. 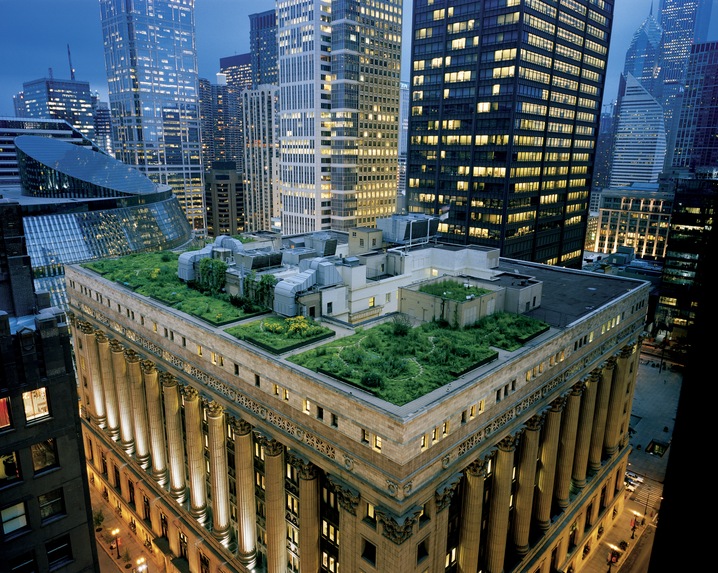 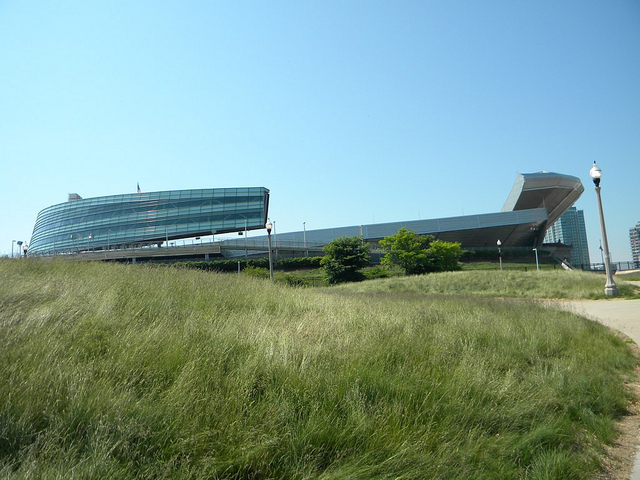 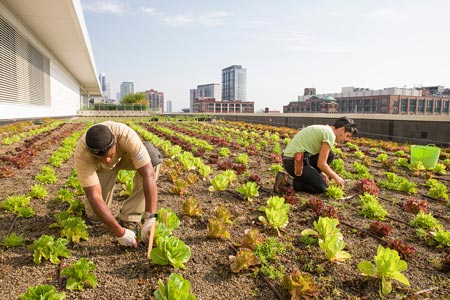 Peggy Notebaert Nature Museum.  The teaching and learning center is covered with a green roof system, consisting of five different roofs.  There is a 2,400-square-foot demonstration roof that exhibits a variety of green roof technologies for visitors. 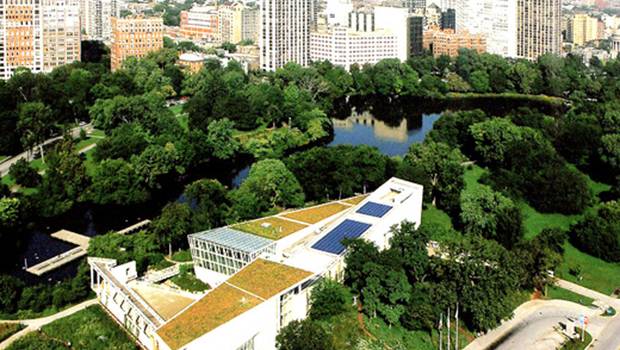 Gary Comer Youth Center has a vegetable garden green roof, which is designed as an outdoor classroom.  The students can garden virtually year round because the roof makes use of both solar energy and ambient heat from the building. 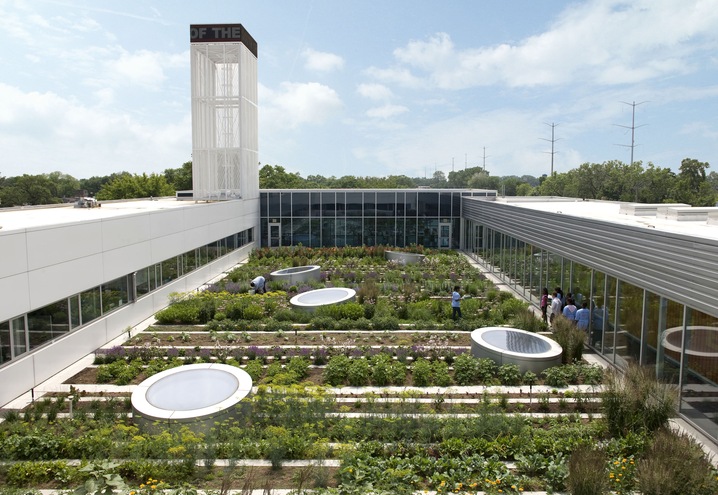 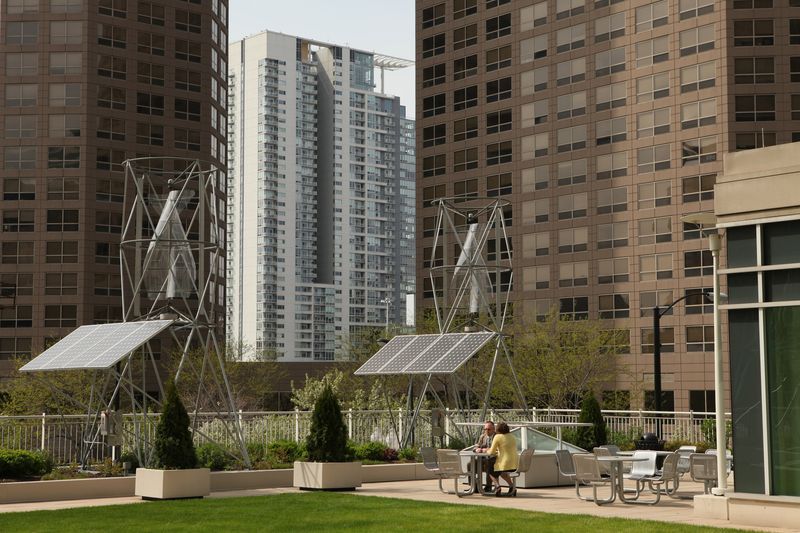 Uncommon Ground.  As of 2008, Uncommon Ground, a restaurant in the Edgewater neighborhood, has the very first certified organic rooftop farm in the United States. Not only does this 2,500-square-foot farm provide lots of luscious produce for the restaurant below, it is also a classroom for urban agriculture classes (grade school through grad school). 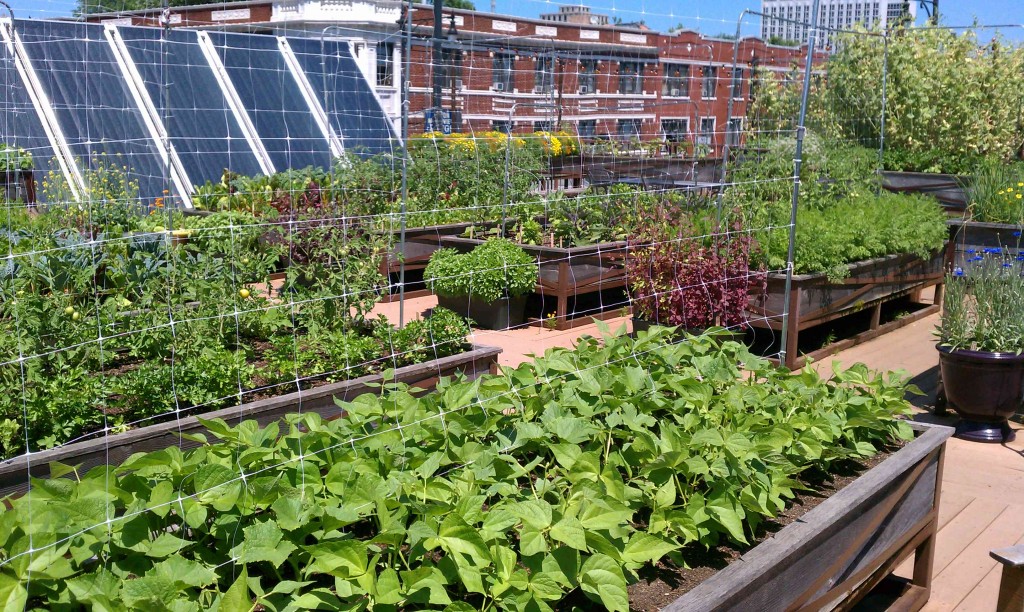 Aqua.   The cool, quiet 80,000-square-foot refuge for residents and guests at the base of Aqua uses a drip irrigation system to water the evergreens and deciduous plantings. 900 North Michigan.  Three green roofs have been added to this mixed use development with 14,000 square feet of prairie in the sky, featuring a mix of grasses, sedum and alium.