We Chicagoans love our city’s architecture.  But many of us also have an affinity for our city’s cemeteries.  Chicago’s history–in all its wild, wondrous glory–and its many influential people are memorialized there in stone.

I recently led my first walking tour of the famous Graceland Cemetery.   One of the sources I used in my research is a new one: Chicago Eternal by Larry Broutman (Lake Claremont Press, 2018).  Broutman’s book is a wide-ranging survey of 32 Chicago (Cook County) cemeteries and 300 gravesites.  He summarizes the history and significance of each cemetery while highlighting the famous-infamous-fascinating Chicagoans who are buried there.

Broutman is a photographer and the book’s emphasis is on the images of monuments as much as it is Chicagoans’ stories.  But the book also serves as a fine armchair journey to Chicago’s far-flung cemeteries. 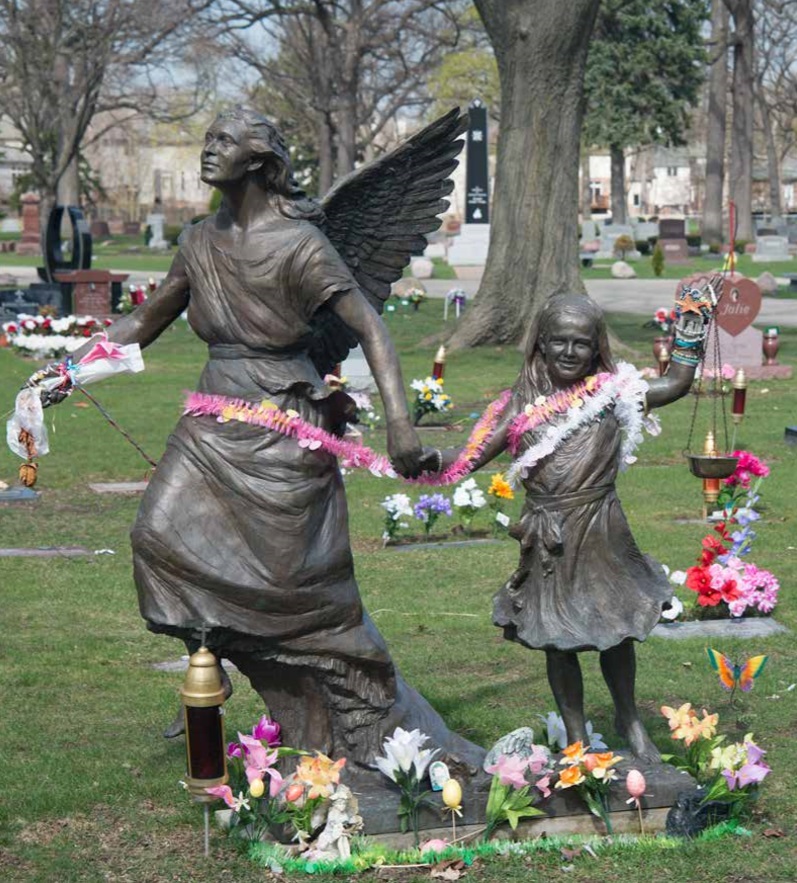 There is the lonely Couch tomb in what was the old City Cemetery (south Lincoln Park).  There is Burr Oak (127th & Kostner), an African-American cemetery from 1927 where Emmett Till and Dinah Washington are memorialized.  Due to segregationist attitudes still prevailing in the early 20th century, black cemeteries were founded separately.  Another is Lincoln Cemetery from 1911 (123rd & Kedzie) where pioneering aviator Bessie Coleman is memorialized, as well as Pulitzer Prize-winning poet, Gwendolyn Brooks.

Chicago’s Czech community created its own cemetery in 1877’s Bohemian (Foster & Pulaski).   Assassinated Mayor Anton Cermak has a stunning Art Deco mausoleum there and many victims of the 1915 Eastland Disaster are buried at Bohemian.  And a most unusual grave marker was more recently created: the “Cubs Forever” columbarium, an ivy-covered wall with space for 288 cremated remains, featuring Wrigley Field seating.

One of the oldest and largest Chicago cemeteries (1853) is Oak Woods (67th & Cottage Grove), where 4,000 Confederate soldiers are buried.  The 183-acre cemetery contains a separate Jewish section.  Prominent Chicago names appear there, too, such as Mayors Harold Washington and “Big Bill” Thompson, Olympian Jesse Owens, and Mob boss “Big Jim” Colosimo.  The inventors of Cracker Jack, the brothers Rueckheim, are memorialized at Oak Woods, as well. 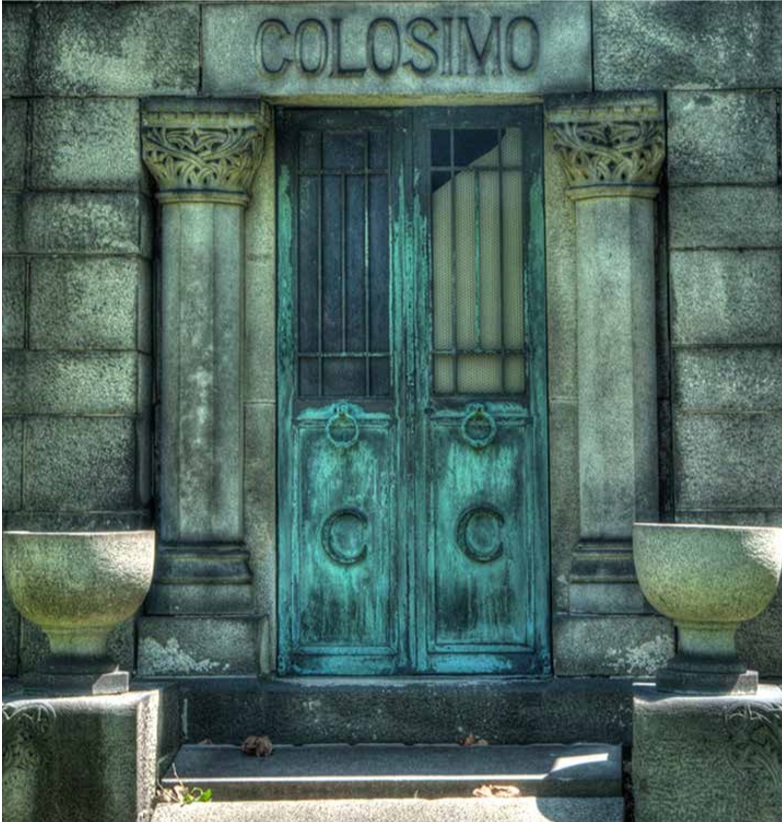 The largest cemetery in Chicago, Rosehill (5800 N Ravenswood), is also one of the oldest (1859).  Buried there are yet more instantly recognizable Chicago names, such as the Rosenwalds (of Sears fame), Montgomery Ward, John Shedd, and Oscar Mayer.  Architect of the famous Chicago Water Tower, William Boyington, is interred there.  Robert “Bobby” Franks, the 14-year old victim of “The Crime of the Century” (Leopold & Loeb), is memorialized at Rosehill.  The cemetery is the largest private burial ground of Union veterans in Illinois, including 16 generals, 350 Union soldiers and sailors, and several members of the 8th Illinois Cavalry, the unit that fired the first shots in the Battle of Gettysburg.

Just south of Graceland is the German Lutheran Wunder’s Cemetery (1859).  While mostly devoid of statuary, the cemetery features one of the most beautiful grave markers in Chicago, “The Sisters” monument, which memorializes the Raithel sisters.  Commissioned in 1906, the beautiful marble sculpture was covered in a discolored Plexiglas cover that author Broutman received permission to replace.  The statue was also cleaned at that time.

Chicago history may be found at Evanston’s 1849 Catholic Calvary Cemetery (301 Chicago Avenue) where Mayor Jane Byrne is buried.  But it may also be found in the southside’s answer to Calvary: Mt. Olivet (2755 W 111th), the Irish Catholic cemetery founded in 1885.  The O’Leary family, of Great Chicago Fire fame, are buried there. 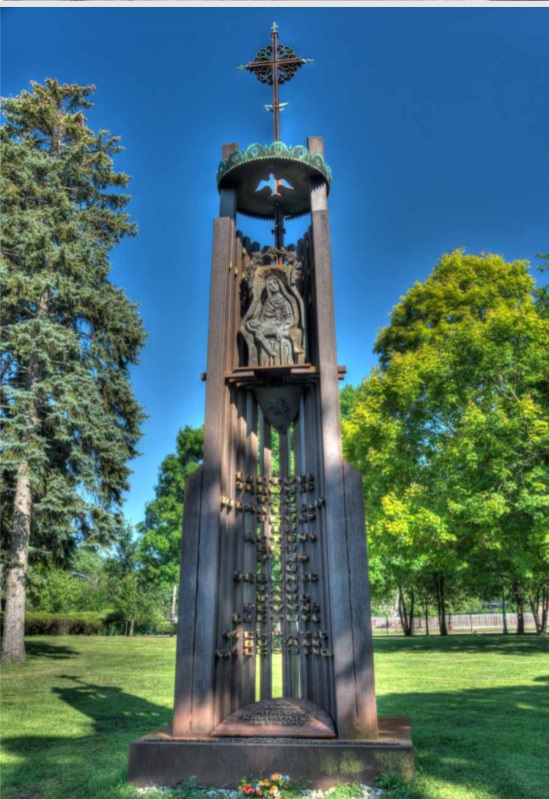 At Forest Home Cemetery in Forest Park (1870s), activist Emma Goldman is memorialized, as are the Haymarket martyrs.  Unusual monuments dot that cemetery’s landscape, including those for the Ancient Order of Druids, the International Order of Odd Fellows, as well as highly-decorated markers commemorating the Romany people (gypsies).

Finally, at Mt. Carmel in Hillsdale (1901) Al Capone and his family (and other Mob figures) are buried…and much visited.

Broutman’s Chicago Eternal is a book that serves multiple purposes.  It was designed as a coffee table volume at over 300 pages with full-page color images.  Broutman’s photography features all four seasons, mostly blue skies, but some atmospheric shadows and lighting.  Some of the images are crisp and clear, while some unfortunately show the overuse of filters.  In the rear of the book is a fun batch of 15 3-D photos and the book comes with 3-D glasses!

As a guidebook (non-portable in its large size and weight–take notes instead), it is a helpful escort to the highlights of each cemetery.  One of the challenges of exploring cemeteries is locating monuments; his images point the way.  The book’s index is invaluable in locating the cemeteries of specific people.  Not a focus on monument design, rather Broutman’s text focuses on the stories of the dead and their place in Chicago’s history. 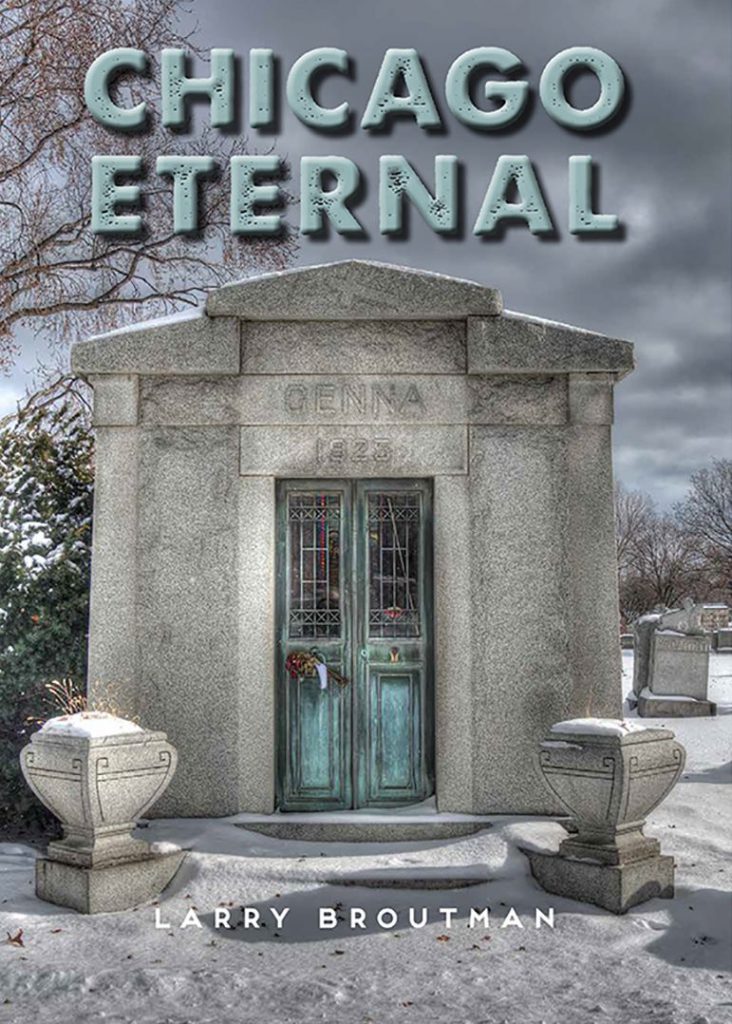 Photographer and author Larry Broutman’s projects include work with Lincoln Park Zoo, Africa Geographic, BBC Wildlife, Children’s Memorial Hospital Clinic, and The Ann & Robert H. Lurie Children’s Hospital of Chicago. His other photography books,  Chicago Monumental and Chicago Unleashed, have been awarded a Midwest Book Award for best interior design, an IPPY Award in the Great Lakes Nonfiction category, and the gold medal in AuthorsDB’s Book Cover Contest.  All author proceeds are donated to go to the Chicago Lighthouse for the Blind and Visually Disabled, and Access Living. making this a Chicago book that gives back to Chicago.  To purchase Chicago Eternal, visit Lake Claremont Press/Everything Goes Media.