Chicago’s earliest Christian house of worship was probably a log cabin, built opposite Wolf Point near the Chicago River in 1831 by Methodists. The direct descendants of that congregation moved to the corner of Clark and Washington Streets in 1838, and a building completed in 1923 now houses the Chicago Temple First United Methodist Church, as well as 18 floors of commercial office space, under its Gothic spire. 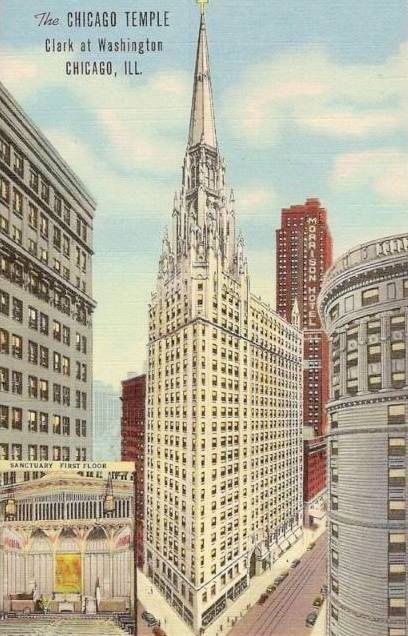 Chicago’s early Christian architecture was predominantly Protestant, and the prevailing architectural style was Gothic, with its tall vertical lines and pointed arches. St. James Episcopal Cathedral (1856 and 1875), at Wabash and Huron, the First Baptist Congregational Church (1869), at Ashland and Warren Boulevard, the Second Presbyterian Church (1872), on South Michigan Avenue, Trinity Episcopal Church (1873), at 26th and Michigan, and Holy Name Cathedral (1874–75), at State and Superior, are all examples of a Gothic style with Victorian American variations.

In the nineteenth-century, in the wake of political upheavals in Europe and Ireland’s Great Famine in the 1840s, large numbers of Irish, German, and Polish Catholic immigrants came to Chicago, settled new neighborhoods, and built large, beautifully decorated churches. Houses of prayer and expressions of faith, these churches were also statements of religious identity and ethnic pride, distinguishing the emerging Roman Catholic minority from the prevailing Protestant majority in late-nineteenth-century Chicago.

Many nineteenth-century churches were built of limestone. Quarried in the nearby Joliet area, limestone had the distinction of turning a soft grayed yellow when its iron content oxidized. Irish immigrants built one of Northeastern Illinois’ first churches out of limestone in 1833 while working on the Illinois & Michigan Canal in Lemont; the present St. James of the Sag was built in the same spot on Archer Avenue two decades later. Olivet Baptist Church (1875–76; originally First Baptist), at 31st and King Drive, St. James Church (1875–80), at 29th and Wabash Avenue, the Church of the Ascension (1882–87), on LaSalle Drive at Elm, and First Immanuel Lutheran Church (1888), at 1124 South Ashland Avenue, as well as the city’s famed Water Tower (1869), were made in whole or in part of Joliet limestone. African Americans built Quinn Chapel AME Church (1891–94) at 24th and Wabash Avenue. Quinn’s limestone facade houses the oldest African American congregation in the city. 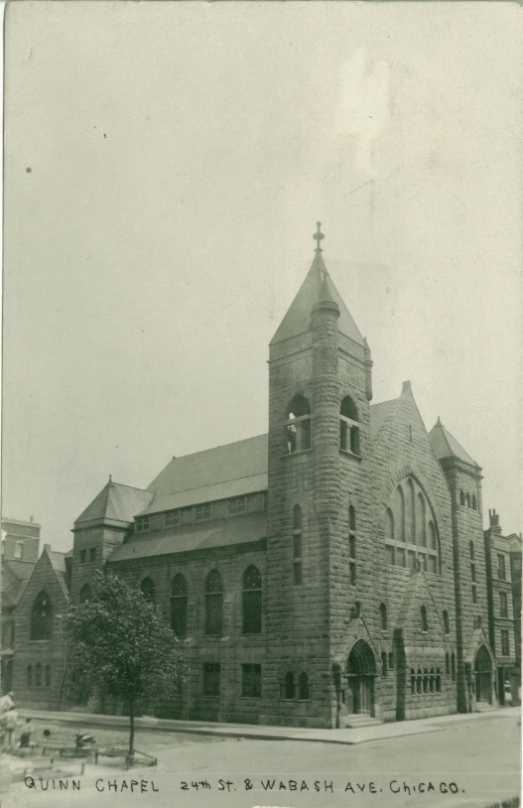 The evangelical Moody Church, founded by Dwight L. Moody in 1864 (as the Illinois Street Church), stood at the corner of Chicago and LaSalle from 1873 to 1915, when it moved to North Avenue and Clark Street to a building completed in 1925. The Moody Church’s large auditorium has hosted world missions conferences and evangelistic crusades.

Catholic immigrant congregations used all the classical architectural styles of Europe—Byzantine, Romanesque, Roman basilica, French Gothic, English Gothic, and Renaissance. Some Catholic churches even used American Colonial and Congregational styles—including St. Mary’s Cathedral (1843), a brick church at Madison and Wabash that was destroyed in the Fire of 1871; St. Bartholomew (1937), on Lavergne at Addison; and most notably the chapel of St. Mary of the Lake Seminary (1925), in Mundelein.

Among the most prolific Chicago church architects from the 1890s to the Great Depression was Henry Schlacks, who was known to tour the cathedrals of Europe during the summer, sketch their details, and then incorporate their elements into his designs of Chicago churches. Thus St. Paul’s (1897), at 22nd Place and Hoyne, is modeled after the Cathedral of St. Cortin in Normandy. St. Adalbert (1912–14), on West 17th Street, and St. Mary of the Lake (1913–17), on North Sheridan Road, are grand Roman basilica–style churches modeled after St. Paul’s Outside the Walls in Rome. St. Ignatius Church (1916–17) in Rogers Park is a splendid Renaissance church. 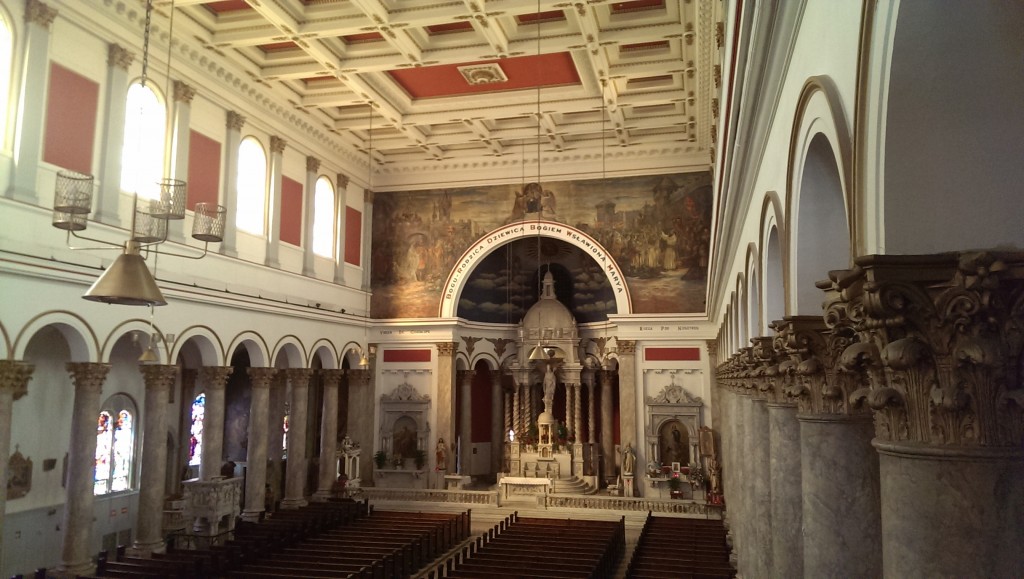 Several Chicago architects known best for their secular designs built houses of worship as well. Louis Sullivan designed the Holy Trinity Orthodox Cathedral (1903), on North Leavitt Street—a genuine touch of Holy Russia in Chicago. Sullivan and his partner Dankmar Adler were also known for their synagogues, including KAM Temple (1890–91), at 33rd and Indiana Avenue, which since 1922 has served as the Pilgrim Baptist Church. John Wellborn Root (of Burnham & Root) designed St. Gabriel Catholic Church (1887–1888), near the stockyards at 45th and Lowe, for Irish Catholic immigrants, and the Lake View Presbyterian Church (1887–88), at Addison and Broadway. 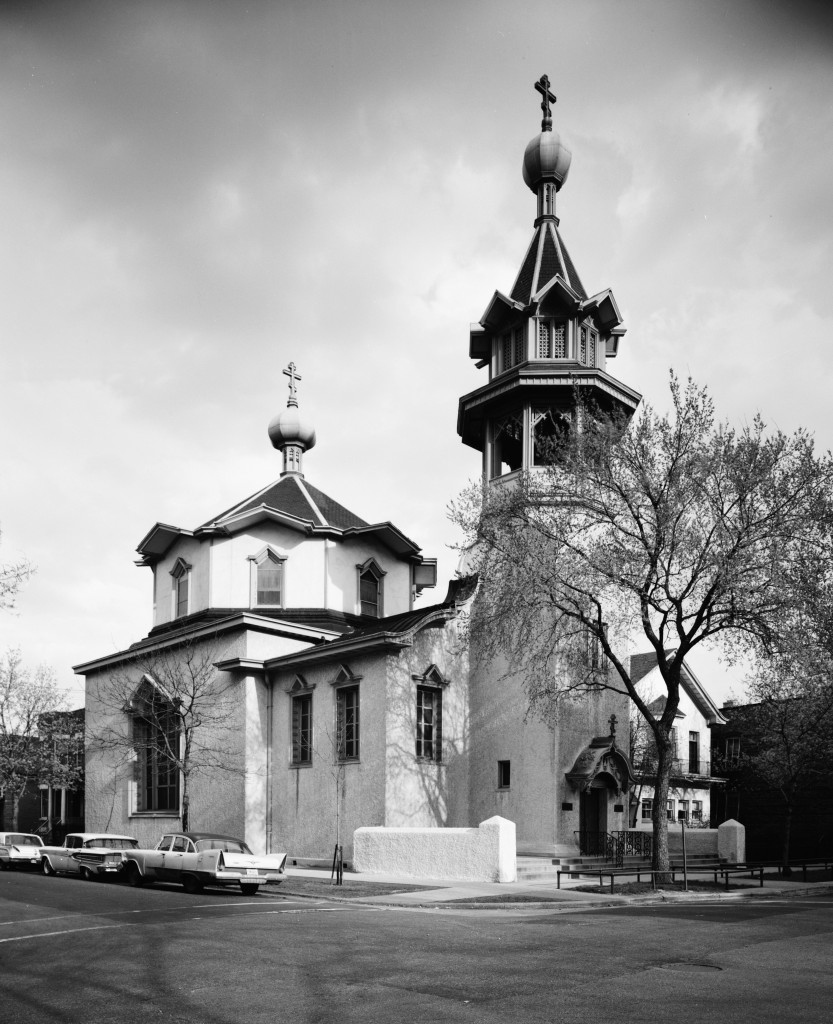 Howard Van Doren Shaw, a Chicago architect who received the American Institute of Architects gold medal, designed several churches, including the Fourth Presbyterian Church (1912–14), at Delaware and Michigan, and the Second Presbyterian Church (1872–74), at 16th and Michigan. In both of these edifices, Shaw worked with existing conditions; in the case of the Second Presbyterian, he was responsible for rebuilding the original church after its devastating fire in 1901. The original structure by the famous Eastern architect James Renwick was remodeled to include interior decorations by Frederic C. Bartlett and art glass windows by Louis Comfort Tiffany, John LaFarge, Louis Millet, Sir Edward Burne-Jones, and William Morris. Fourth Presbyterian was designed in association with the Eastern architect Ralph Adams Cram in 1912. Besides Shaw’s contributions to the design of the church, he was responsible for the beautiful court, fountain, and manse.

architectural historyarchitecturecathedralsCatholicChicagochurchescongregationsEncyclopedia of ChicagohistoryimmigrantsJewishOrthodoxProtestanttemplesworship
« Previous PostRetro Weird Chicago: You Made Me Like It Next Post »Chicago, How Green Are You? Let Me Count The Ways...