Every episode, we explore thought-provoking connections between Milwaukee and Chicago, two cities 90-miles apart on the shores of Lake Michigan.  This podcast is an effort to lay out some of these links, to connect the stories of the two cities.

This is the story of a nationally acclaimed architecture firm–one with several talented family members and an over 80 year history—a firm that left its mark on Chicago and Milwaukee …but is not as widely known today.

It is also the story of a magnificent Chicago church that the firm designed which is currently threatened with destruction.  Preservation Chicago has named the city’s historic Catholic Churches to the 2021 Most Endangered list …and underscored the plight of this church.  We will take a look at what’s at stake for this church, and, unfortunately, for too many historic churches.

In Cream City Windy City’s first episode – which was the incredible story of the dismantled Chicago post office reused to build the Milwaukee basilica –  the architect at the center of that story was Erhard Brielmaier.

A towering man with a stern look and Santa Claus beard, Erhard Brielmaier was one of the most prolific architects of his time.  From the late 19th century well into the 20th his firm designed hundreds of churches, hospitals, and schools across the U.S and Canada.  Upon his death in 1917, he was praised for his body of work, having designed more churches than any other architect, and some of the most beautiful and enduring, at that. Brielmaier was born in Germany in 1841 and came to America as a boy.  The family settled in Ohio and there Erhard’s father taught him carpentry and construction.  The young boy also took an interest in design.

Brielmaier married, had 13 children (you heard that right), and began his architectural design career in Ohio.  But in 1874 he decided to move his family to Milwaukee.  It was a burgeoning city full of recently arrived immigrants in need of the services of architects for their churches and schools.

Brielmaier worked his way up from carpenter, sculptor, and altar builder to that of a renowned architect.  His contribution to Milwaukee’s Old World character manifested in religious structures most of all …and most of them were Catholic – churches, convents, rectories, schools – but he built hospitals and commercial buildings as well. Brielmaier was a man of deep faith, who was devoted to his children’s education.  He fostered in them a commitment to love, justice, and the arts.  One son became a well-known sculptor.  One daughter became an accomplished painter and the first American woman to own her own art studio.  His grandchildren followed in the family footsteps, such as his nationally celebrated artist granddaughter, Sr. Thomasita Fessler.

Of Brielmaier’s nine sons, five of them went into architecture.  In 1887, three of the architect sons joined their father in his work.  He changed the name of his firm to E. Brielmaier & Sons.  Their main office was in Milwaukee with a branch office in Chicago.  The elder Brielmaier would die in 1917 but the sons would continue on for much of the 20th century.

Erhard Brielmaier died on a hot August day in Milwaukee, 1917,  at 76 years of age.  His obituary ran in newspapers across North America.  He was highly esteemed, his firm having designed more Catholic churches and institutions than any other American firm.  A New York City newspaper stated that, “Seven churches in Milwaukee stand as monument to his genius.”  E. Brielmaier’s sons proudly carried their father’s legacy. One of the Chicago churches designed by E. Brielmaier & Sons was Our Lady of Victory (5212 W Agatite Ave, Chicago, IL 60630) in Jefferson Park on the city’s northwest side.  The church complex was a labor of love, built over decades by a group of architects, E. Brielmaier & Sons the second of the three firms involved.

Jefferson Park was growing rapidly in the early 20th century with many Catholics moving into the area.  The Our Lady of Victory parish was formed in 1906 to serve them.  It would be a cutting edge parish for Chicago at that time in that it was ethnically diverse, not dominated by one nationality.  Germans, Poles, and Irish would pray together there.

The new church complex, which included church, school, and convent, opened in 1911.  This first section was designed by Herman J. Gall, who had apprenticed under Louis Sullivan and was listed among Chicago’s most influential church architects. But the parish continued to grow and there was need for more space.

1927 is when E. Brielmaier & Sons came onboard.  The firm designed a rectory and new convent, as well as the magnificent lower church and chapel.  The upper church would be built a couple of decades later.

This thriving parish was shocked last year to learn that the Archdiocese of Chicago planned to close it down in 2021.  The rationale behind this decision makes little sense.  Our Lady of Victory’s buildings are in excellent repair, they are a stable parish with no debt, who have been paying all of their expenses and contributing more than their fair share toward archdiocesan needs.

But none of that seemed to matter.

Five area parishes were consolidated down to two.  Our Lady of Victory – the largest, most historic, most architecturally unique, and most centrally located of the five churches – is instead slated to be completely dissolved and, very likely, see all of its buildings sold off.

150 parishioners signed the petition and a core group is united in fighting these actions.  Partners with them in this process include Preservation Chicago and the Northwest Chicago Historical Society. They are currently working with local politicians and the city.  The parishioners have created a nonprofit organization, Save Our Lady of Victory, they are active online and an increasing number of people are supporting them in this effort.

They have appealed to the Archdiocese and most recently to the Vatican, fulfilling all the requirements and paperwork.  But it appears that the closing of the church, the dissolving of the parish, unfortunately, is a foregone conclusion.

So the next priority is the fight to save the historic church structure.  They are aware that the church may end up being sold, despite their efforts.  The land is valuable and this historic complex could easily be bulldozed for something perceived as more profitable.

But they are pushing for alternatives to demolishment, such as adaptive reuse as a spiritual, community, and/or arts center.

The fight to save Our Lady of Victory church is first, about community.  The church, like many churches, has long been a community center, a landmark, an anchor in its neighborhood.  Thousands of parishioners over the decades have sacrificially contributed toward the construction of these buildings. The people built the church and the church should belong to the people.  The parishioners believe that this place should be preserved as a legacy for their children and grandchildren.  The loss of Our Lady of Victory would be enormous for the entire community. Saving the church is also about preserving an important piece of Chicago history.  There are a dwindling number of quality historic structures left on the far northwest side.  Our Lady of Victory is the oldest parish there and unique in that it was one of the first to be established with no dominant ethnic group.  And its architecture is of rare beauty.  On top of E. Brielmaier & Sons’ magnificent lower church and chapel, the upper church and Spanish Mission exterior, designed by architects Meyer & Cook in the early 1950s, are unique and awe-inspiring.  The asymmetrical steeple, a beacon for the neighborhood, is one of a kind in Chicago. Preservation Chicago has placed the city’s Catholic churches, dating from the 1850s to 1963, on its Most Endangered list for 2021.  With 88 Catholic parishes merging, and 25 closed or for sale, there is an urgent need for bold and creative action.  Preservation Chicago asserts that the churches are much more than places of worship.  They are architectural landmarks and neighborhood cornerstones.  Preservation Chicago is advocating for landmarking the churches together into a thematic grouping.  They are working to ensure that the buildings survive the ongoing parish consolidations and property sales.  The idea is that, even though a church building may no longer be used as a church, it can be dedicated to the community.  Because when churches are closed, and razed, something irreplaceable goes with them. Brielmaier & Sons graced Milwaukee and Chicago with many stunning buildings. Their churches have been especially beloved by their parishioners and important to their surrounding neighborhoods. The firm designed a substantial portion of Our Lady of Victory’s rich and uniquely beautiful complex.   For the sake of history and legacy, for the sake of community, this church should be saved.

If you’d like to learn more, see preservationchicago.org or saveolv.org Thanks so much for joining me.  I welcome your comments, questions, and suggestions.  You can leave them at the blog post for this episode at wendycitychicago.com.

Outro music, “I Lost My Baby In Milwaukee,” by KEdKE. 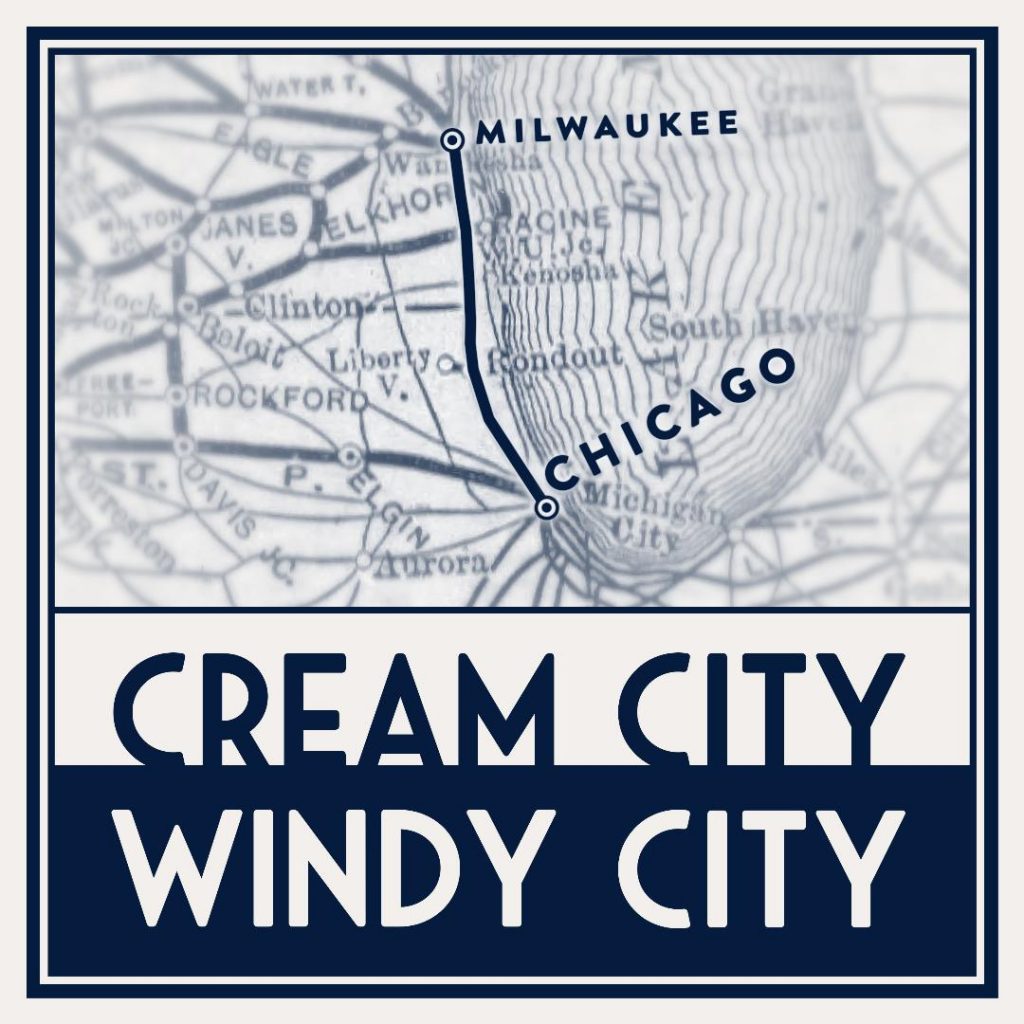