Giant Studebaker at the 1933-34 Century of Progress

The Century of Progress International Exposition was held on Chicago’s lakefront in 1933-34, its purpose to celebrate the 100th anniversary of the city’s founding and to provide jobs and inspiration for a nation in the midst of the Great Depression.

Many major auto companies would be represented at the Fair, each trying to outdo one another.   Studebaker planned to construct the largest automobile ever built.   Wanting to publicize its newest,  most luxurious model, the company decided to build an immense representation of the President Land Cruiser, framed in wood, covered in plaster.

Displayed in the great hall of the Travel and Transport Building, the Land Cruiser was 80 feet long, 28 feet high, and 30 feet wide.  For maximum appeal, it was painted Canary Yellow.  Below the running board was a door that led visitors into an auditorium that could hold 80 guests. Films were shown that extolled the virtues of the new Studebakers.
Studebaker enjoyed a great deal of positive publicity from its participation in the World’s Fair.  At its conclusion, the giant Land Cruiser was dismantled. 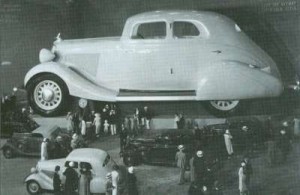 1930s1933 Worlds FairautomobilesCentury of ProgressChicagohistoryInternational ExpositionlakefrontStudebakertransportation
« Previous Post1930s (Politically Incorrect) Chicago Footage Next Post »My, What A Big Bottle You Have