Much of Chicago’s architecture is simply beautiful to behold.  But add the back stories of those who made the buildings, the how and why, the context of time and place, and current challenges to restore and preserve, and you can’t help but become intimate with our built environment.  Toss in stories of family, neighborhood, ethnic history, along with entrepreneurial spirit, pride and passion in the work …and you have a real Chicago story.

That is what all came together for me when I recently visited Henry Frerk Sons (3135 W. Belmont) a business landmark for more than 125 years in the Avondale neighborhood of Chicago.  The company has played an important role in Chicago’s built environment, from providing building materials in the aftermath of the Great Chicago Fire, to preservation and repair materials for today’s aging buildings.  Henry Frerk Sons is one of the oldest continuously operating businesses in Chicago, specialists in historic preservation processes and materials, and known for their specialty mix designs for concrete and mortar.  The company has been at its location on Belmont since 1888 and is still family run.

After a behind-the-scenes tour of the three-building complex with Simon Leverett, I had a fascinating conversation with him and Matthew Wolf, who both shared Frerk history and images. 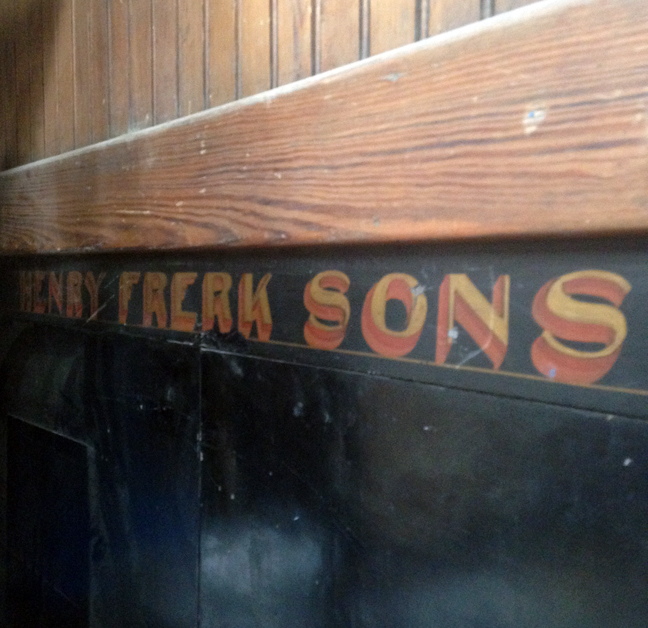 My site guide, Simon, Masonry Restoration Specialist, is a stonemason with over 30 years of historic masonry preservation experience.  He was trained in the Guild of London, operated his own masonry business in the UK, and has worked on historic landmarks internationally and all over the United States. 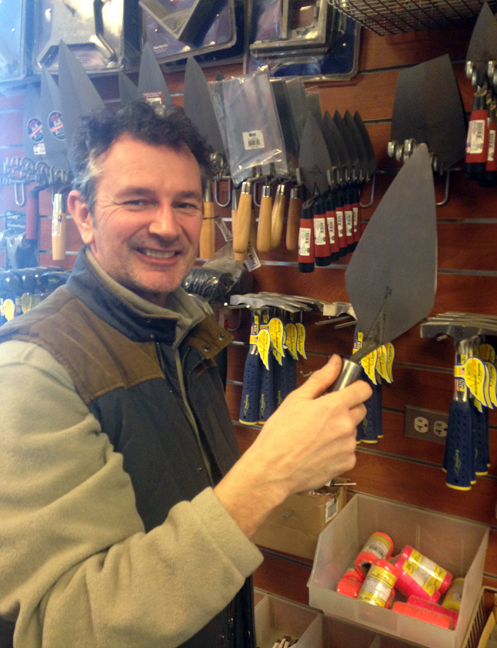 Matthew is a fifth-generation owner of Henry Frerk Sons.  With his education in architecture, historic preservation, and business, along with an extensive background and training in masonry work, he manages the Building Materials Division.  Matt is clearly the proud family torch-bearer, his office filled with an array of vintage memorabilia and historic documents.

Simon and Matt are part of the three-person Restoration Services team, which also includes Elisabeth Logman, who holds a degree in historic preservation from the School of the Art Institute of Chicago.  Their recent projects include work on many important buildings in Chicago:  the Monadnock, Fisher, Old Colony, Emil Bach, Berger Park, Jeffery Towers, Shedd Aquarium, Unity Temple.

Matt and Simon relayed an adventure they had while on assignment examining the aging structure at the 68th Street Water Intake Crib in Lake Michigan: the boat trip out there, the skyline views, the tight security involved.  They are passionate about their work and it shows. 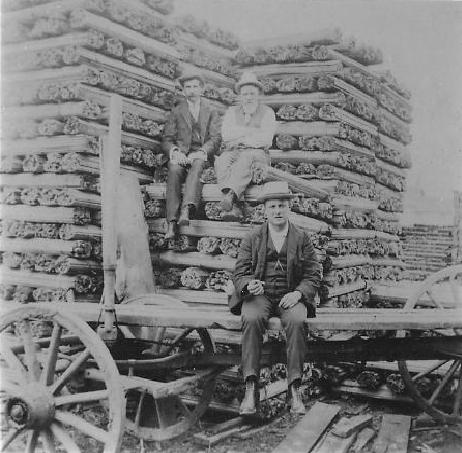 Matthew Wolf also has every reason to be proud of his family’s business history.

Born in Prussia and not quite 20 years old, founder Henry Frerk immigrated to the United States in the 1860s, marrying and settling in Ohio.  But after his young wife died unexpectedly, Henry moved on to Chicago to make a fresh start.

It was the early 1870s and, especially in the aftermath of the Great Chicago Fire, Henry and a business partner saw plentiful business possibilities.  They initially purchased buildings on Milwaukee Avenue, the former Native American trail, then a planked toll road into the city from the northwest farmlands.  Farmers were not keen on paying the steep toll to deliver downtown and Henry recognized an opportunity.  He became a commission merchant, weighing and buying the farmers’ produce on the spot for a percentage and delivering it himself, while also extending credit to his customers and offering them needed supplies at his store.

Henry’s next successful venture was also on Milwaukee Avenue, this time, a hay, grain, and feed store a few blocks away.  But by 1887 he was ready to expand dramatically: to the current location at Belmont, Kedzie, and the Chicago Northwestern Railroad.  Proximity to the railroad and the additional space allowed Henry’s company to grow much larger. 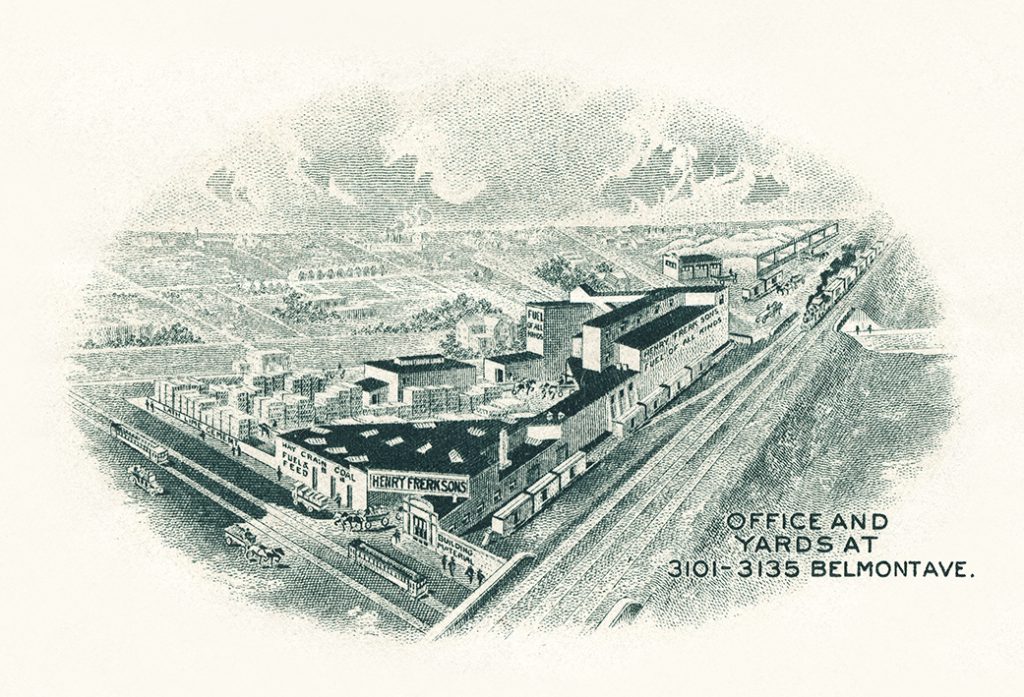 To satisfy the demands of the late 19th-century building boom in the city, Henry added a lumber, door, and sash business, as well as selling coal and wood fuel, and a wide assortment of building materials (sand, gravel, cement, plaster).

The neighborhood Henry had chosen was well-suited for business with its easy river and railroad access.  On Chicago’s northwest side, Avondale was a sparsely-populated, incorporated village in rural Jefferson Township until annexation by Chicago in 1889.  Dubbed “the neighborhood that built Chicago,” Avondale in the late 19th-early 20th centuries became home to factories that produced a dizzying array of goods that were shipped nationally, including Florsheim Shoes, Dad’s Root Beer, Olson Rug, Maurice Lenell cookies, I.S. Berlin Press, and many more, along with huge warehousing establishments. 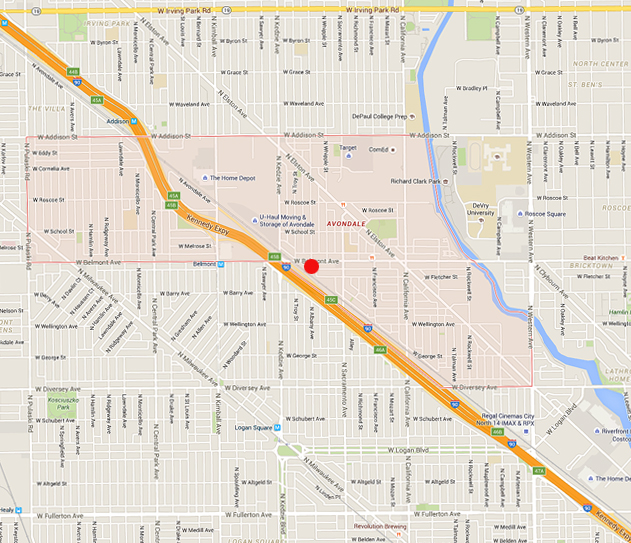 The potential for a better life with plentiful jobs and less crowding brought many ethnic groups to the area: Germans, Swedes, Poles, Italians.  But the Poles became most identified with the area.  Jackowo and Waclawowo were the names of two settlements in the larger “Polish Village,” and Milwaukee Avenue was dubbed the “Polish Corridor.”  With the many churches lovingly erected by these ethnic groups — including St. Hyacinth, one of the three basilicas in Chicago — the area gained another nickname: “the neighborhood of smokestacks and steeples.”

(For a detailed and pictorial history of Avondale, including more about Henry Frerk Sons, see the book Avondale and Chicago’s Polish Village and website Forgotten Chicago.)

After Henry died in 1910 his two sons, Alfred and Otto, took over the company and renamed it Henry Frerk Sons, as it has been known for over a century.  Otto’s son Rodger was next in line to steer the company through the mid-20th century.  His daughter Loren and her husband Kenn Wolf became the next generation to direct Henry Frerk Sons.  And now their son Matt has assumed leadership.

The 20th century saw many innovations in the company’s transportation, products, and services.  From a 20-team delivery fleet of horses and wagons (as in the featured photo; the original two-story stable with elevator still stands) they became early adopters of automobiles and trucks, by the 1920s operating a fleet of Mack and Packard trucks, along with many automobiles and, for a little while longer, those traditional teams of horse-drawn delivery wagons. 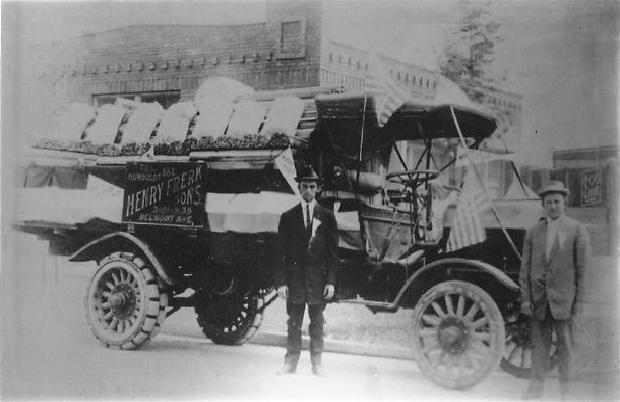 Henry Frerk Sons today employs 28 people and takes great pride in their products and services.  As Chicago finds itself in the 21st century with a great number of aging buildings and, thankfully, a widespread desire to save many of them, Henry Frerk Sons has enjoyed an important role in architectural preservation.   The company offers a full range of historic restoration materials, including the region’s largest mortar selection. 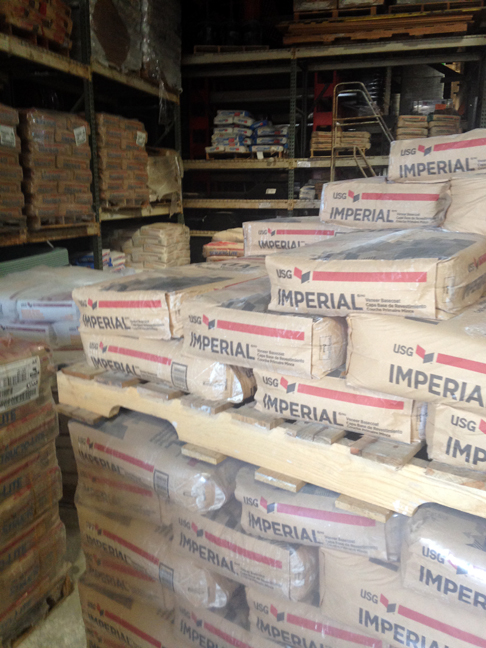 I had never given mortar a whole lot of thought before, but witnessing its centrality in the company’s work, I now understand its importance.  Not only does mortar, a workable paste, bind building blocks (stone, brick, concrete) together, it fills and seals gaps.  To restore a historic masonry building it is crucial to get the mortar right: the formula and the color must work with the existing materials.  Henry Frerk Sons is known for their custom blending and color matching.  They offer the “Chicago Color Line,” 13 colors of ready mixed repair mortars for the most commonly used stones in the Chicago area. 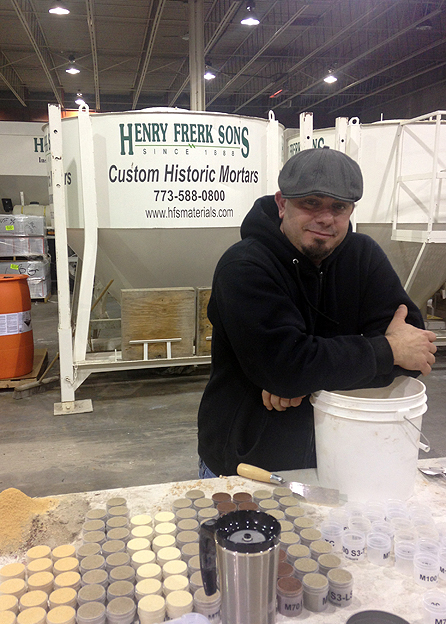 Henry Frerk Sons continues to be a favorite choice of architects, preservationists, and building owners for highest quality restoration products and services.  Their products include masonry repair materials for terra cotta, sandstone, limestone, bluestone, granite, marble.  They also provide concrete and crack repair materials, cleaning agents, paint strippers, and masonry coatings. The services they provide include: mortar testing and analysis and all manner of support to make restoration jobs straightforward and cost-effective.  They are committed to demystifying the historic restoration process by conducting free workshops and training. 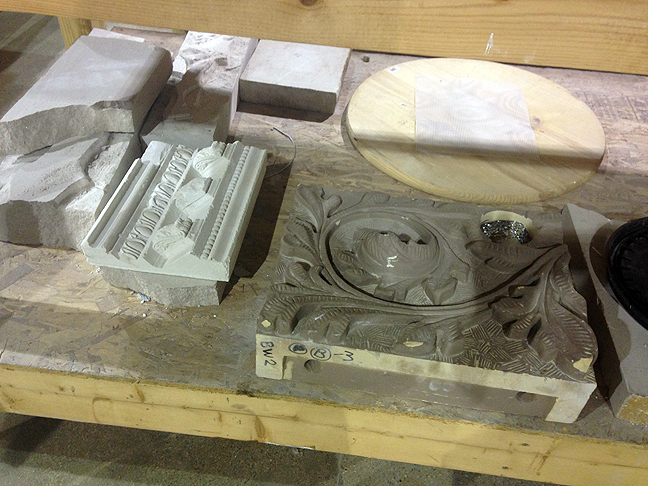 How gratifying to see a proud family-run, neighborhood-based company celebrating their — and Chicago’s — history with a passionate eye to the future, helping ensure that our architecture continues to be beautifully preserved.

Much gratitude to Simon Leverett and Matthew Wolf for sharing Henry Frerk Sons‘ story with me.