Raising Chicago: Encyclopedia of Chicago Fact of the Day

Here’s a Chicago fact that never fails to fascinate: the raising of the street grade in the 19th century.  I recently came upon two seemingly lost young women consulting a map and after asking if I could help them find something, we got into a conversation about what they as visitors liked about the city.  They brought up the raising of the streets.  Similarly, out of the blue, a non-Chicagoan friend asked me if I knew that the city had been raised.  One of the main sources that pops up in a Google search on the subject is from Oxford University in the UK.

It’s interesting that I’ve never heard locals make much of this; maybe we have taken huge, historical engineering feats in stride (reversal of the river, anyone?).  But, let’s consult the Encyclopedia of Chicago for a factual look at what the raising of the streets entailed:

“In the late 1850s, the streets on most of the South Side and parts of the North and West Sides were raised by an average of between four and five feet, though in some places by as much as eight feet. This was done in two stages, in 1855–56 and 1857–58, for the purposes of facilitating drainage and accommodating the city’s sewerage system. The most spectacular aspect of this effort, and the one that drew commentary from tourists, was the raising of existing buildings to the higher grades.

Low, flat, and on a clay and loam soil that absorbed little moisture, Chicago lacked natural means of drainage. It also was impossible to install underground sewers steep enough to drain their contents into the Chicago River without raising the streets. The first phase of grade raising seems to have been an effort to drain rainfall. The second was part of the larger project of building the sewer system, designed by engineer Ellis Sylvester Chesbrough for the city’s Board of Sewerage Commissioners and constructed beginning in 1856.

While the street raisings were public projects, raising buildings to the higher grade was left to individual property owners. Frame structures were relatively easy to raise, though many were not raised (houses in some parts of the city are still below grade), but the raising of large brick hotels, banks, and other business buildings was a technological feat in the 1850s. George M. Pullman, of sleeping car fame, made his initial reputation in Chicago raising buildings.”  ~Encyclopedia of Chicago 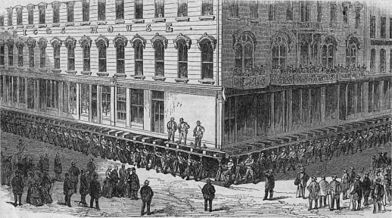