Chicago’s Historic Prairie Avenue District is a gem in the city’s south Loop neighborhood.   Not only is it a preserved area with a restored streetscape and interpretive signage, a delightful small park with fountain and mature trees, but two important house museums and a National Historic Landmark church are beautifully preserved and open to the public – all within a few handsome blocks.

I am so honored to be a docent at the house museums: Glessner House by H.H. Richardson and Clarke House, the oldest house in Chicago. 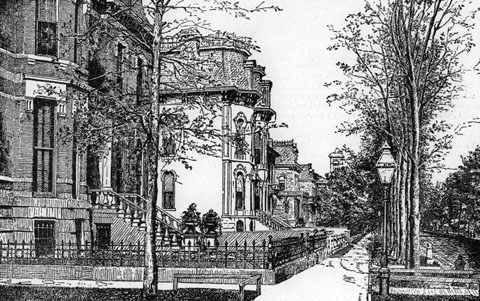 Explore the history and architecture of Chicago’s Historic Prairie Avenue

Explore Chicago’s historic Prairie Avenue, once known as the “sunny street that held the sifted few.”   The Avenue was once home to over 70 millionaires, including Marshall Field, George Pullman, and many other Chicago business and social leaders of the late 19th century.  Prairie Avenue once connected Chicago’s Fort Dearborn with Indiana’s Fort Wayne, but became a desirable residential area after the Great Fire of 1871 because it was completely unscathed, and due to its proximity to downtown business and easy commute that avoided crossing the Chicago River.

Highlights of the walks will include an interior tour of two Chicago landmarks. The Wheeler Mansion was built in 1870 and is the last surviving house on Calumet Avenue. The imposing Second Empire style house was saved from demolition in the late 1990s and was extensively restored and renovated and now serves as the Wheeler Mansion boutique hotel.

Second Presbyterian Church, Chicago’s only individually listed National Historic Landmark church, was completed in 1874 by architect James Renwick, Jr.  The sanctuary was rebuilt by Howard Van Doren Shaw following a devastating fire in 1900, and is one of the largest and most intact Arts and Crafts interiors in the country, and features nine windows by Tiffany.

As you stroll down the street viewing the surviving homes, you will be treated to images of the grand homes that have been lost.  An absolute must for anyone with an interest in Chicago history and architecture.  The tour will be led by William Tyre, Executive Director and Curator of Glessner House Museum and the author of Chicago’s Historic Prairie Avenue, published in 2008 by Arcadia Publishing.  Copies of the book are available in the museum store.