An Edwardian couple breaks from their journey through a thick forest to amorously embrace.  The sign indicates they might be on their way to Chicago, but they appear to be a long way off.

The caption reveals that they are indeed quite lost: “Chicago agrees with me.”  While Chicago might well have kept them “must too busy” once they arrived, one thinks these two are a little lost in love, and nowhere near Chicago.

This postcard image appears to have come from Great Britain; actually, several towns affixed their names to it. 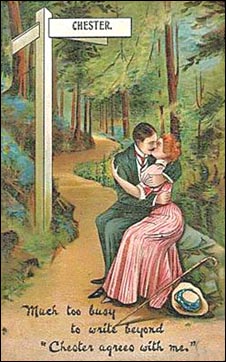 Imagine a British couple’s surprise when visiting America’s most American of cities in 1900 (no thick forests to be found):

190019th centuryAmerican cityBritishChicagocoupleEdwardianhistorylost in lovepostcardtouristsvintageweird
« Previous PostChicago's Skid Row Next Post »Toy Maker for the World: Encyclopedia of Chicago Fact of the Day