One could walk right by this building today without taking a second look.   But the history it holds! 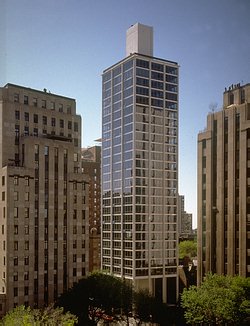 I was introduced to this Bertrand Goldberg modern high rise a couple of years ago by Bob Segal (WendyCity’s official photographer) on his Gold Coast photo walk.  Built as the Astor Tower Hotel in 1962, it’s early – non-curvy – Goldberg.  The Beatles stayed here in the 1960s, Elton John in the 1970s.  Today the building contains condos.

But around the corner from the main entrance on Astor Street is a door marked ’24 E. Goethe.’  This is where you entered if you wanted to visit Maxim’s de Paris, one of the most elegant restaurants and nightspots in Chicago from 1963 to 1982.  Intended to be an exact replica of Maxim’s in Paris, Goldberg designed the Art Nouveau and red velvet jewel box of a place, while his wife Nancy operated it.

Image from a Maxim’s brochure

Sharing a block with the famed Pump Room just west, this must have been one glittering street in 1960s Chicago as celebrities had their chauffeurs deliver them here for the best dining and nightlife in the city.  As the Bertrand Goldberg website relays: “At the opening of Maxim’s in 1963, Nancy and Bertrand Goldberg sat with Rudolph Nureyev and Margot Fontayn.”

Just another evening at Maxim’s.

There are plans to restore Maxim’s to its original glory – plans made public a couple of years ago; I’m not sure what is currently happening.  But I will find out; I’m currently doing research for my new tour.  Maxim’s will be a featured site on WendyCity’s upcoming 1960s Nightlife in the Gold Coast evening tour.  Time to bring out the pumps and pearls… 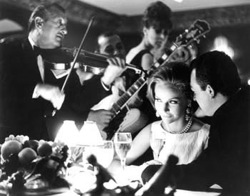